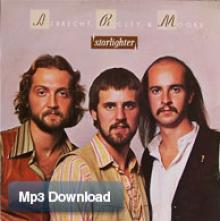 The Nashville experience was a good one for AR&M. Their management company and booking agency under the direction of Ray Nenow were both on music row. The band’s success with Gently Flowing Feeling led them to record their second nationally distributed project in Tennessee.

The young production duo of John Thompson and Shane Keister took on AR&M’s next release known asStarlighter. The music was a contemporary pop version of the trio’s acoustic sound featuring many Nashville session legends. Tommy Cogbill and Joe Osborne were on bass. Larry Londin and Kenny Malone played the drums along with Pete Bordonali, Steve Gibson and Jon Goin on guitars, which created an identifiable 1970’s sound. Shelly Kurland did the strings and Bonnie Bramlett sang a wonderful back up vocal on the song "Carry It On".

The songs "Eyes On The Clouds" and "You Are My Life" became nationally successful, rising on the newly formed Contemporary Christian (genre) charts into the top twenty. The music on the album featured the only non-original song the trio ever recorded, "The Benediction", by Tom Walker.

Bill and Jannie Grine did the artwork. The photography was shot in Franklin, Tennessee just blocks from where the Roley family would eventually move. The back cover featured the Roley’s dog Noah in front of what is now known as Alexander Plaza.

Sparrow records released and distributed the album on the newly formed Spirit Records label. The band’s former producer Greg Nelson was the new president of Spirit Records, which operated out of Los Angeles, California. The band continued to tour with the Talbot Brothers and concluded the summer of 1977 traveling across the US playing festivals with the Talbots, Second Chapter of Acts and Keith Green.

In all, thirty thousand copies of Starlighter sold over the next several years. It was released on vinyl, cassette tape and eight-track formats. It was the most financially successful recording of AR&M.