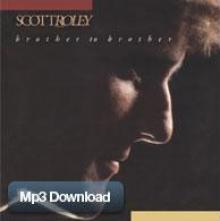 Refuge Records developed its own distribution system and left the Benson Company sometime during the mid-eighties. The Brother To Brother Album would be my last nationally released recording.

It was recorded in Western England at The Chapel Studios in Hampton Bishop Parish near the Welsh border. David Eastman produced the sessions and the British recording star Melanie sang the background vocals.

Our favorite pub was The Bunch Of Carrots, which sat across the lane from the studio. We would record all night and then sleep until lunch, which we ate at the pub. We would resume recording at about three in the afternoon repeating that daily schedule for the next six weeks. All in all it was the most unusual of all my recording experiences. Linda came with me and spent most of her time hitch hiking around England, Scotland and Wales.

The cover art and photography were done in house and the record sold over thirty thousand copies of the vinyl and cassette tapes. It was my best selling solo recording and was punctuated by a wonderful vocal duet performance by Michael Card on the title track. The single was "Brother To Brother" because of Mike’s popularity and did quite well nationally.

Perhaps my most famous song has been "Things We Leave Behind", which was recorded first on Brother To Brother. Mike Card and I wrote the song on his bus as we traveled and toured doing shows in the late eighties. I would open his concert with my songs and then play guitar and do background vocals with him and John Catchings, his marvelous cellist. The song "The Perfect Prayer" was also a co-write with Mike and was featured on Brother To Brother.